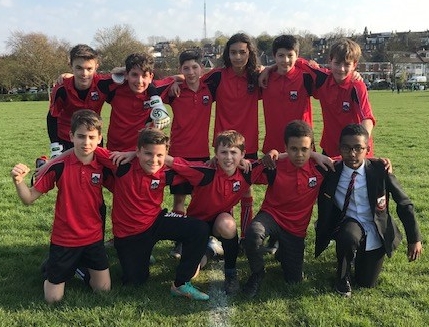 Our Year 7s football season came to an exciting end on Monday. Having played 9 of the other teams in the league, Alexandra Park were sitting in second place after winning 8 games and drawing 1. Our last game of the season was against a very strong Gladesmore team who were top of the league having won all of their 9 games. This meant that only a win would be enough to win the league. The game was very tight until Manu struck an excellent team goal half way through the first half to take the lead. However, Gladesmore scored on the stroke of half time to leave both teams level. The quality of the game continued into the second half and there was some fantastic saves from both goalkeepers. Eventually, APS broke the deadlock as Thomas finished off an excellent moved which was created by Paul’s powerful run. With Gladesmore chasing an equaliser, APS scored on the counter attack to ensure that they won the Haringey Year 7 football league. This adds to their Haringey 7 a side tournament victory which they also went unbeaten in.

Well done to all players on a fantastic season!