As the y8 girls handball team made their way to the copper box arena they were all excited to represent Haringey at the schools London youth games. After a quick warm up and some lunch they were ready for their first game against St Paul’s way trust school. After having have to get used to the very bouncy balls, APS soon scored, Orla scoring that first important try. 2 more followed in quick succession from Justine and Alena both using their pace to get past the defence. 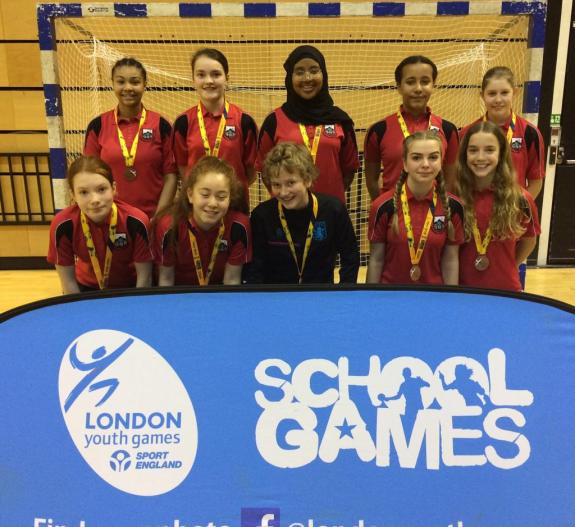 APS defended brilliantly, with Elsie hardly bothered in goal. Another 2 goals form Orla and another from Alena and APS finished their first game with a bang! Eventually winning 6:0. After two games off they played their second game against Northwood School. APS ended up putting 8 goals past Northwood (Orla scoring 4,Alena 3 and Justine 1) but it wasn’t all about the goals as Nancy, Kate and Mabel defending brilliantly to stop a strong attacking side to only 1 goal. APS knew the next game was going to be tough as they versed a very strong Bower Park team who had been playing handball a lot longer than they had. Every single person played an amazing game with Orla kicking the game off with an early goal. A tense few minutes followed with Elsie in the APS goal called in to action and producing many good saves to keep APS ahead. However moments later Kyrah scored a well-deserved penalty that put them 2 ahead. APS frequently put pressure on their goalkeeper with Mia and Hafsa providing brilliant passes to try and set up more goals and Justine frequently using her pace down the wing to stretch their defence. Unfortunately APS conceded a penalty but Elsie brilliantly saved it and the ball was quickly passed up the pitch where Alena scored a goal to put them firmly in front. Orla followed with 2 more taking her total of the group games to 9 goals. APS were determined to keep a clean sheet as the whole team made great interceptions to give the possession back to them. The game finally ended 5:0 meaning APs had finished their group scoring 19 goals and only conceding 1!!!!!! They were all very excited to play in the semi-finals against Langdon academy who had won all their group games. Unfortunately APS went down by 1 goal early on in the game but they didn’t give up and quickly gave it to Orla who scored the levelling goal. However they had a very good girl who was very hard to stop when sprinting down the wing. She scored their second try of the game to put them in front again. APS had many chances and must have hit about every part of the frame of the goal! Eventually Orla scored their second to level the scores once again despite the other team annoyingly man-marking her. Kyrah, Kate, Nancy and Mabel made frequent interceptions but unfortunately could not stop that same girl scoring yet again. Elsie was called into action a few times and managed to keep the scores level. Despite APS clearly being the better team and Alena, Justine and Orla having shot after shot the game was close to finishing. Mia and Hafsa made many brilliant set ups but APS could just not score and the game eventually finished 3:2. It was very frustrating for APS after winning their group games so magnificently to lose to a team they dominated their match against. Langdon went through to the final to play Bower Park (the team APS had beat 5:0 earlier in their group game.) That game went to the second round of extra time before any team could break the deadlock. Langdon ended up winning 1:0 in the last minute of the game before penalties but it was very frustrating for APS who knew they should have been in that final. APS went home with bronze medals but were disappointed not to get higher. However they loved playing handball and were already looking forward to training later in the week.