After a good warm up we were ready for the two games ahead. It was a 7 aside tournament and we had one sub. With a game of ‘rock paper scissors’, St Thomas More started with the ball.  Soon we got six tags to gain possession and then it was our turn to attack. With the first play APS scored the first try of the game. Then the other team were on the attack.Despite our whole team effort to defend, St Thomas More stole a try.  Determined to win, APS scored another quick try and shortly after the game ended.  APS had won! 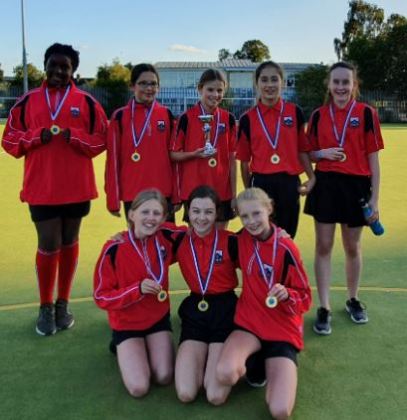 The second game was against the Highgate Wood, who had won the Year 8 tag rugby competition. Highgate started with possession but were easily tagged six times.  With APS in possession we battled on and after a couple of tags we broke through to score. Again Highgate had possession, but with a diving interception APS stole the ball and scored a try to push ahead.  In almost an identical play towards the end of the game APS snatched another interception to win the game and take the gold medals.  A fantastic team performance by: Josie, Rocca, Esme, Elvie, Layla, Lily, Maisy and Arabella; and a special thanks to Ms O’Flaherty for training and taking us.